This morning started off with the successful MOT (yearly test) of the yellow Norton at Saltire motorcycles in Edinburgh, friendly people and today was their birthday so a BBQ was in full flow. The run to the MOT station did start badly though when the bike spluttered to a halt about 400 yards from the house, must try to remember to put petrol in the bikes in future!
Out for a nice run after on the B emm's, cold but dry , unfortunately the mist stopped the full colours of Spring shining through but nonetheless well worth the effort to get out on the bikes today. I then thought it was high time I changed the rear tyres on the bikes, 13,000 miles from the Tourance's, pretty impressive I think. I struggled for a while to break the bead, I managed (with Fi's help) one side but then called in the Calvary in the shape of Alex who of course had the tool for the job, a very cold tyre changing session ensued, thanks Alex!

I have to remind our local viewers that next weekend is the Tay Valley Norton club Huntygowks meeting, we are back at the Tullybannocher cafe near Comrie on Sunday 6th April starting around 11am for a day of kicking tyres and tall tale telling, come along and join the fun, all welcome!

Rally on the Loch

This weekend saw the 3rd Rally on the Loch, organised by the Loch Lomond club and the meeting just happened to be on an island in Loch Lomond. We took the main road to Stirling then cut across the back roads to Loch Lomond. Despite having travelled half way around the world we got lost in Balloch, we asked several people where the ferry left from but nobody knew, at this point I have to say it was rain and sleet weather with a biting wind. Of course because we were camping the spring like weather we have been enjoying gave way to wintry conditions again. Luckily Dennis Jackson spotted us wobbling round in the rain and led us to the ferry, thanks Dennis!
We left our bikes in a secure compound on the mainland and got the small passenger ferry across to the island, it appeared most of our usual team were partying in their tent with a vengeance, so much so that Snibs wins the early to bed prize after I believe a couple of spectacular falls, some throwing up and the result was night night at half six!
A great weekend with wonderful people, we met Gary from Belfast who is doing a Canada to Argentina trip later in the summer and were able to tell him some stories and offer advice, hopefully he gets a blog going so we can all follow his adventures down.
The usual overindulgence on Saturday night and luckily a sunny but cold morning. Great run home with another load of good memories and new friends made, motorcycling, ye canny whack it!!

As always the show was a bit disappointing stand wise but a great opportunity to catch up with old friends, you do feel at times you are just paying the entry fee to talk! Some nice bikes in the Classic hall although I thought the private entries were thin on the ground compared to other years. Some of the club stands though featured some great restorations. I did wonder at the California Highway patrol contingent though complete with uniforms and hopefully imitation guns, more suited to a swinger session than a bike show methinks. Freddie Spencer former World champion 500 & 250 GP title holder was guest of honour but I missed all his Q&A sessions. Not sure what the answer is but MCN need to have a good look at the format , most people I know only go to meet up with friends, there seems to be less to look at every year and sorry to say the brollie dollies aren't even that appealing any more (maybe an age thing.....) BMW were noticeable by their absence, maybe they knew we'd be there! Great to catch up with an old pal from a former life Niall MacKenzie, former GP & World Superbike rider and all round good guy, now commentating at the Moto GP's and teaching fat guys in leathers how to ride bikes round racetracks. I was also lucky enough to have a blether to John McGuiness, Isle of Man TT hero with 20 wins to his credit, BSB rider and nice guy. 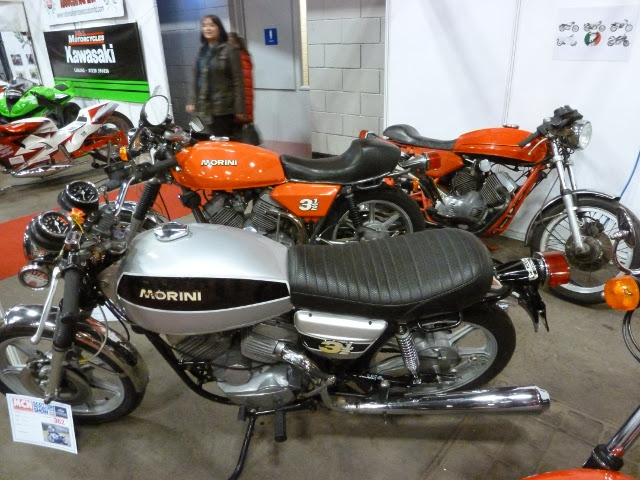 All Roads lead to the Moon ....The Roads

After last weeks very successful talks on our recent trip, Perth Motorcycles on Thursday night and Glamis, Strathmore Vintage club Friday night we decided to upload the short video which is part of the talk onto you tube. We hope you enjoy it and thanks to the public for the impressive turn out for last weeks talks.
As always your comments and feedback are appreciated, see you on the road....somewhere.