Yes thank god its Friday! Despite my lack of "conventional" employment its still good when Friday comes around. This week I've been busy working on my old Commando MVD. I felt it was long overdue a front end rebuild, the seals were weeping and the chrome was starting to dissapear from the fork legs. I aslo read good reports on a damper kit for the front end from Landsdown engineering which actually gives controllable damping both compression and rebound which has to be an improvement on the original setup.
So all new parts ordered including the damping kit, I renewed everything and put in extended top bushes from RGM motors. Its taken longer than normal as everything was meticulously cleaned, checked and built and polished where neccessary.
So this afternoon (Friday) I was quite chuffed to finish it roll it of it's stand and check the new improved suspension, guess what, I now have an almost rigid front end!! Bugger!! I reckon I haven't got enough clearance in the new bushes and fork legs so I'll probably have to start all over again on Monday. Not so happy at the moment about that but its the old moan I suppose, why is it when you buy bushes or any other critical part you always have to engineer a fix yourself, I even had to grind part of the new fork spring with the Dremel to get it to fit past the damper. The damper kit is excellent and in no way to blame. Moral of the story don't buy a Norton unless you are a bit handy with the spanners, grinding wheel, emery paper, lathe, milling machine and welding equipment, joking of course (about the milling machine)
So thats it I'm going to immerse myself in Alcohol now in an effort to blot out the mental anguish. Hopefully get out on the Guzz this weekend though!
Posted by Gino's Travels 2 at 15:51 No comments:

When the boat comes in

Queensferry for lunch today (well a late breakfast actually) so good to be out on the bike again and managed to watch the Ferry from Zeebrugge , Belgium coming in. It always reminds me of holidays, sometimes I think if I had my passport with me i'd just head over and jump on to start a tour, a tour to anywhere! 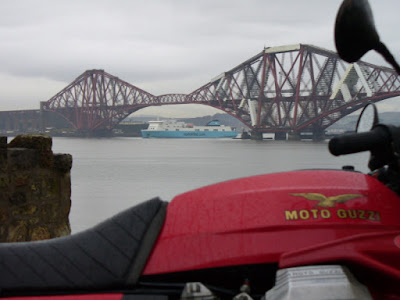 Managed to get out on the bike last Sunday, the 17th of January, thats the latest first ride of the year for a long time. And it felt brilliant, great to be back in the saddle and grinning from ear to ear which makes a change from me being crabbit! (Crabbit = Bad tempered in Scots)
Now just looking forward to a gradual warming up, some lighter nights and eventually Spring!
One thing I've noticed is that due to the bad weather and the fact the local authority's are running low on salt and grit then they don't seem so keen to waste it on non icy roads which means less cleaning of crud from the bikes after a run, result!!

This brought a smile to my face last week also...enjoy

So enough of this winter talk, here's some summer photos from 09 to remind us what it looked like! 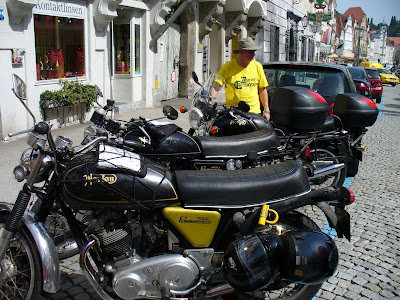 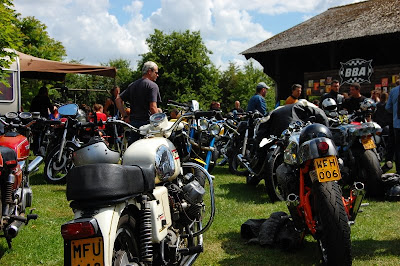 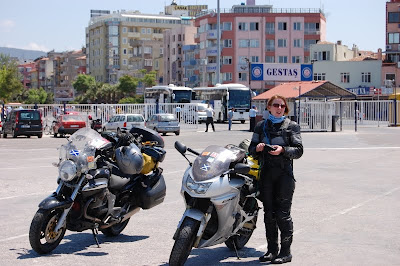 MVD at the side of a river in Austria 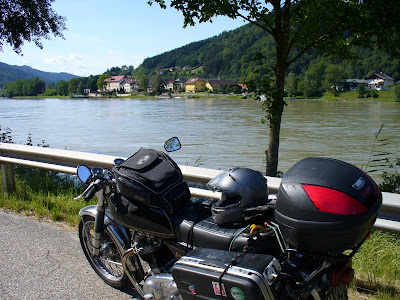 A gaggle of Nortons navigate the coast road from Applecross 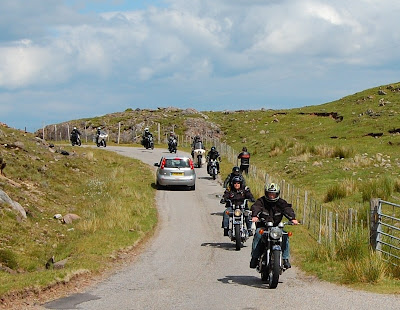 Not be long now, I can almost feel the heat (or maybe thats the central heating kicked in)
Posted by Gino's Travels 2 at 16:26 No comments:

And so the siberian wind has relaxed its grip and the snow and ice are melting so I am happy in one respect BUT now the Rally I was supposed to be at this weekend has been postponed which is a great pity. I got a call last Saturday about the postponment due to concerns about the weather (Well it is supposed to be a winter Rally) so immediately the temperature started rising, sods law I suppose.
Well hoping to get out for a run this weekend that is unless I've forgotten how to ride a bike............
I'll keep you all posted
Posted by Gino's Travels 2 at 15:57 No comments:

Will the freeze never end!

Not sure what the weather is like in your part of the world but here in Scotland it's freezing! There has been non stop snow and very low temperatures (-18C!) for over three weeks now and to be honest its becoming a pain in the arse. The roads are terrible and haven't been treated enough, mainly due to the incompetence of the people who manage such things and of course the Scottish government and officials who are surprised when it gets cold and snows, this is Scotland for Gods sake!! On the same latitude as Sweden Latvia Canada and Russia so why wouldn't it be cold!
This is the price we pay for living in an area of outstanding beauty i suppose but do we need to accept the muppets who run the country? (Apologies the muppets are entertaining at least)
The biggest hassle of course is that I can't get out on my bike at all and that's not good for my mental health, spent a few hours in the garage yesterday rebuilding the UJ and shaft on the Guzzi that exploded a few weeks ago as we are supposed to be going to a bike rally in a week and a half (Yes camping!) All we can hope for is that the temperature rises to at least zero soon so that we can get the road cleared enough to get the bikes out.
If you are from the Scottish Government and reading this then stop reading and get this farce sorted, Edinburgh is a joke! If I could ski I'd ski to work (theoretical work that is!)
Keep smiling anyway it can't last forever..........can it?
Posted by Gino's Travels 2 at 16:09 No comments: