I got round to looking at the Norton today after it misbehaving on the way back from Germany, strange thing was I never found any disasters, funnily enough no seizures, no lumps out of valves so Alex and I were running through the possibilities and failed to come up with one. I checked the compression and the right side seemed low, about 90 lbs against 100 on the left (which was also low) , it did feel low on compression on the kickstart also. Alex checked it electronically with an array of electronic wizardry and failed to come to a conclusion so I stripped it (which is the quick way to do it anyway)
The only strange thing was that the carbon on the piston tops was breaking up rapidly so I wonder if the fuels I was using was washing the carbon off and dislodged enough to foul a plug and stick a valve? I'm going to put a new set of rings on, re grind the valves and build it back up and see how it goes, it was starting to use oil so it could do with rings and a hone anyway. Good thing is its not going to cost me a fortune, bad thing is I still can't tell what brought it to a halt. That's life, it was a good excuse to look at the bottom end anyway and say hello to the camshaft! Another day in the garage but hopefully get out for a run tomorrow...
(not on that particular Norton)

A mixed week with a poor finish

We fixed the bike on Tuesday afternoon after super service from the guys at RGM, Norton parts delivered by lunchtime on the Tuesday and bike fixed (in the rain) by 5PM. Funny story is that there was shelter at the rear of the hotel which the owner encouraged us to use, full of buckets some of which had food waste in, after being physically sick three times I pulled the bike out and worked in the rain, when it got heavier Fi & John held a tarp over my head so I could work.
We set off for an uneventful and quite boring trip to the Eiffel region to camp for the night. En route we met a Polish guy on a BMW similar to ours heading to Scotland for a holiday, his chain was slack and he didn't know how to adjust it so hoping for good Karma I gave him a lesson whilst adjusting it for him.
We got the tents up and then it started torrential rain, there was a wee hut next to us with a porch so we sheltered and cooked in there and spent the night looking at the rain and bizarrely a laser show from a one man rave tent at the far end of the field. We also met Jed from Essex who asked if I knew his landlord Mick who had a Norton, of course I do matter of fact we'll be drinking beer with him again this weekend in Belgium, small world this Norton world.
We set off in the sunshine the following day and tried to stick to the small roads, it was torture, traffic light after traffic light and small towns everywhere, my brothers Yamaha started to drag its clutch, turned out the clutch fluid had started to evaporate so we were back on the highway, around Liege and Brussels then towards Gent, another fuel stop and we met up with Tam Bradley again.
We stopped for the night in Ypres in a hotel and went to the Mennen gate to pay our respects to the war dead, a very moving last post brought a tear to my eye. It also started to make me angry, all those mostly young men dead so that society can move on yet we still have our ruling classes abusing power on all levels and worst of all our politicians and the people who benefit from there old pals power in government, not just the UK but worldwide, depressing thoughts.
We arrived at the Begonia on Friday to a warm welcome (and heavy rain) from Guy, Marc and Micke, tents up, we gave them a hand to set up the bar and then a weekend of drinking and talking nonsense with some good music and dancing thrown in. The run on Saturday was a battlefield tour with a local historian, once again as I stood in packed graveyards I felt depressed at how little we learnt from history.
A great weekend with great friends spanning several countries, great to see everybody again and great to feel the camaraderie amongst the group. We finished off with a nice dinner before we got the boat on Sunday with Geert Callens who guided us along some nice roads.
As always the loading on the ship was a joke, they split Fi & I up and tried to get me to park in a space which didn't exist! After a bit of arguing I got moved up a deck with the others. After a good experience on PO on the road out we had a crap experience on the way in!
The bike was running well today as we passed the Angel of the North and as we pulled clear of Newcastle I felt the bike go off and lose power, Fi said smoke was coming out of the silencers, game over, bike seized (I think) so after a wait I came home in a breakdown truck, I'm glad to say the others got home without incident, Fi's Norton ran faultlessly the whole trip so I guess its me that's the problem.....every journey is an adventure, especially on a Norton !

Every day is an Adventure 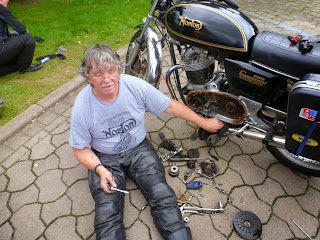 The ride to catch the ferry from Hull was uneventful except for the rain which flooded the roads around Newcastle. The PO ferry from Hull to Rotterdam is much better than the DFDS Newcastle ferry and the alcohol is more reasonably priced so we took full advantage of that!
The run to Bremen was ok weather wise, some rain but uneventful, thank god for GPS as we would never have found the site otherwise. Once again great to meet old friends from all over Europe it really is an International gathering and really just an International drinking club.
Good laughs over the weekend and some sad news that Chris Norton died on Friday, Chris was the membership secretary for years and a nice chap, we raised several glasses to him on Friday night!
We left the rally today (Sunday) and were heading to se Tomas & Andrea in Frankfurt but about
120 miles South of Bremen my bike made a horrible grinding noise and lost its drive, not good when you're overtaking on the Autobahn! I got it into the side of the road and realised it was serious so pushed it to the nearest junction, we spotted a Service station so  pushed it to there, we tried towing but a combination of Alex's hangover and my thought of certain death saw that idea quashed. we took it in turn to push the bike (fully loaded) the just under 2 miles. This isn't a great hobby, bike pushing and I don't think it'll catch on.
We called Andrea to tell her we had broken down and found out Tomas's dad had just died so we said we'd visit again at a better time. I stripped the primary side and found the primary chain had snapped, its also wrecked the alternator and bent one of the chain tensioners. Tomorrow's task will be to order spares in the hope they arrive quickly and allow us to continue. With the Norton every journey is indeed an adventure! It could be worse, we have found a small hotel with a bar so life isn't all bad.
Posted by Gino's Travels 2 at 20:49 6 comments:

Checking out an easier way to Blog

So this week we're off to Germany and then to the Begonia Rally in Belgium the following weekend, in an effort to keep up the blog without carrying my laptop I'm trying an alternative method, stay tuned! This is a test really but I'll add a couple of gratuitous pics to see how it looks
Posted by Gino's Travels 2 at 20:46 No comments:

Saturday was nice weather, a day finalising preparations for our trip to Germany later this week for the International Norton Rally. A pleasant run down to South Queensferry just to make sure the Nortons are good to go in quite warm weather so that's it now until we leave on Thursday.
Sunday it rained so luckily the Classic show was on at Ingliston just along from the house, glad it wasn't far, compact is probably the best way to describe it. Some nice bikes and the guests of Honour were Giacomo Agostini and Alex George. Funny thing is I cant get excited about "famous" people really so that wasn't the draw for me. The purple helmets were on outside going through their routine in the pouring rain, once again when you've seen it once then it loses its appeal.
I think the plan is to build the show up to equal Stafford but they do have a lot of building to do! Great to get out and meet everybody though, paying money to get into a hall to talk bikes seems normal these days.
Looking forward to our short (just under 2 weeks) Euro tour on Thursday, stay tuned to see our exploits.