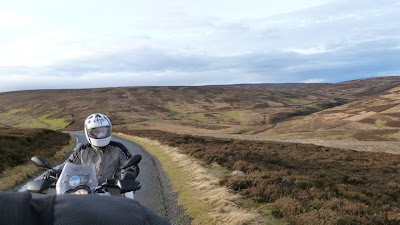 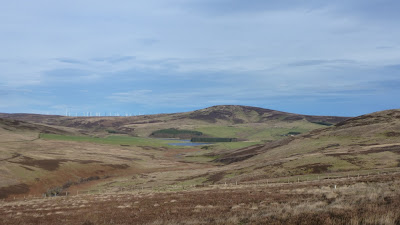 A silver VW Passat estate driven by a fat guy was the only bad thing that happened on a 110 mile trip down and round the borders today, just a pity I didn't write down his number. We had a great run, disappointed our original tea stop in Gifford was closed but then a nice run over the Lammermuir hills with a stop at Duns for a late breakfast. The cafe at Earlston was shut as well so I'm assuming everybody has made enough money this year and don't need to open, or maybe New Years eve or Hogmany as its called here is now a holiday as well?
Heading up past the Stair Arms on the A68 we were both passed by the fat guy with his obviously stupid wife on a bend over a solid white line, he made the oncoming traffic move over as well, must have either been pissed, in a hurry or is just oblivious to the consequences of careless, dangerous and stupid driving? If you see the car give it a wide berth, If I see the car parked I'd really like to explain to fat man what the consequences of his driving could have been. Having lost two good friends in accidents caused by stupid car drivers this year it really annoyed me.
Apart from that its been a great day out (although it took an hour to get all the crap off the bikes when we got home) The last run of 2011 and looking forward to many more in 2012, a great New Year to all who read this and I hope all your wishes come true and your problems disappear in the coming year (except Mr Fat and Mrs Stupid that is!!)
Have a good one
Posted by Gino's Travels 2 at 15:51 1 comment:

You meet the nicest people on a motorcycle

Last night we all met up for the Special K bike club Christmas party. A busload came over from the Forth Valley club also. Brilliant banter in the company of nice people, what other interest would give you the feeling of belonging to an extended family? None I guess.
Cheers to Ian the sober for doing his taxi run!
Tomorrow is the last day of 2011 so I think i'll probably need to get out on my bike!
Posted by Gino's Travels 2 at 13:17 No comments:

Boxing day at the beach 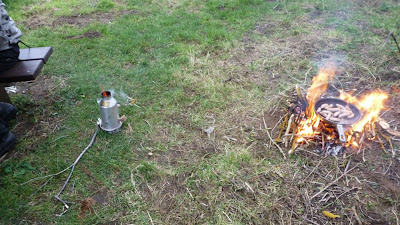 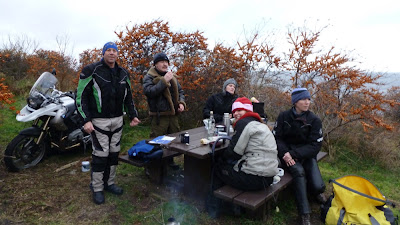 Rather than do the more traditional Boxing day thing we decided to have a picnic on the beach. Undeterred by the gale force winds and Laurenne's crap cooker our intrepid group managed to have a pleasant day and after some attempts by Ian and Bert to make a fire (and me failing to get the kelly kettle going without the use of petrol) we eventually had our hot and cooked sausages to finish off the meal. Bert used his BMW as a windbreak (good that it came in useful)
We had the inagural run on our G650GS's and I was mighty impressed with the "small" beemer.
A fine way to pass a day, good company and good crack, thanks to Ian and Ali, Bert and Laurenne for coming along, we should have taken the tents guys and made a night of it!!
Posted by Gino's Travels 2 at 19:09 No comments: 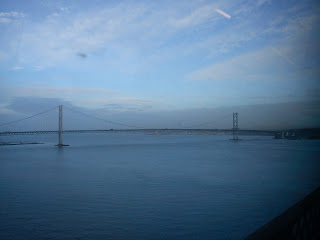 En route to Perth for a few beers. Pre christmas party with some of the guys. A view of the road bridge, soon it'll change as they start to build the new bridge over the forth. History in the making.
Posted by Gino's Travels 2 at 09:08 2 comments: 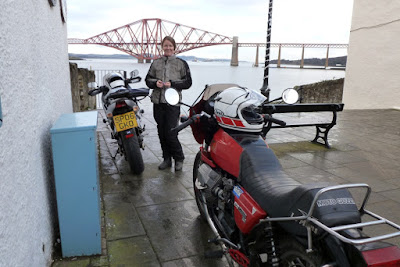 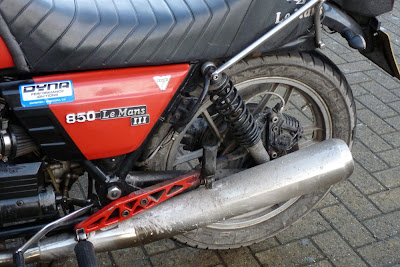 This week we were plagued with high winds which has made it feel cold, still not too much snow though so today we managed a run out. First to Queensferry for breakfast and then a wobble along the back roads to drop in on Ian and Ali in Livingston. The temperature dropped like a stone as we headed inland and by the time we got to the estate where Ian and Ali live the side roads were white with frozen snow. Not wanting to be heroes we left the bikes at the end of the road and walked the 100 yards, cheaper in the long run!!
The bikes were covered in Salt when we got back (see the photo of the Guzzi) and took a bit of cleaning. Sometimes you wonder if its worth going out at this time of year, and hour on the road means an hour spent washing the salt off but it is because what else would you be doing? Joining the hordes of mental people shopping? Nope, best to get out there and keep a grin on your face
Posted by Gino's Travels 2 at 15:49 No comments: 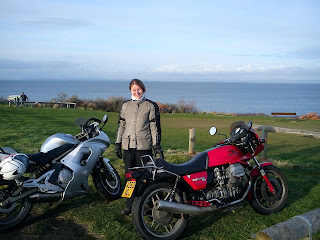 After the snow appeared yesterday morning I was a tad depressed at the thought of no motorcycling. Today however the snow was gone and it was mild enough to venture out. Days like this at this time of year are a bonus to be taken eagerly. A nice day out on the bikes, not warm but ice free roads, better than expected.
Posted by Gino's Travels 2 at 10:42 No comments: 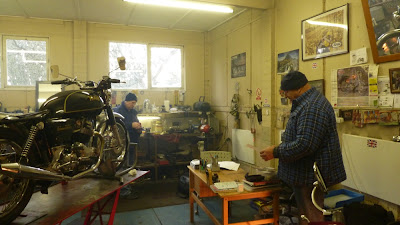 Last weekend came and went and here we are just 2 weeks before Christmas already. Busy week this week, I spent the first couple of days down South at one point near Dover, much nicer weather I have to say. Yesterday we had the big storm and Scotland came to a standstill (apart from stuff blowing over!) Its the first time in my life I remember schools being closed because of the wind! What nonsense, we really are a bunch of namby pamby wimps these days. Half the Office at Fi's work went home because it was windy! Ridiculous, I'd sack the idiots who allowed it!!
Anyway today Alex and myself were up at Sandy's workshop playing with Alex's range of amazing tools, upshot is Sandy's 750 Commando will have to have the lid off to see whats amiss inside, nothing serious we think, time will tell.
Posted by Gino's Travels 2 at 18:42 No comments: