Vancouver to Williams Lake via Kelowna

We left Vancouver hoping my overheating issue had been solved but after 96 miles pulling uphill at 65MPH in 36 Degree Celsius heat it was obvious it hadn't, the next 150 miles were terrible. What should have been a really nice ride through the mountains and forests of British Columbia was a nightmare, my bike constantly overheating, at one point we tried towing but it was a serious uphill slope and we were dicing with many huge trucks. We limped into Kelowna, me having to switch off my bike at all of the several stop lights, shades of Fi in Santiago, ridiculous on a bike which is only just over 2 years old and with 30, 000 miles on it has turned out to be so bad. BMW is the ultimate adventure bike, its a F&&&&&& adventure to see if you can make it to the next town! We made it to Nigels house and met Nigels wife Elma and two sons Luke & Robin, Elma' s Brother and family were also there over from Holland for a holiday, despite there being a very full house we were made very welcome.
Luke knew of an additive which some of the car racers used to lower the engine temp so he went off to get me more coolant and some additive (with a great discount....thanks Luke)
Drinking and watching Robin play football was the nights entertainment. After a long lie Nigel showed us around Kelowna (really nice town) and after lunch I changed the coolant again!!
More partying and great to see Mark again following the Wyoming Norton meeting, Mark offered to show us the road up to Sorrento the following day (about 110 miles away) so Saturday saw the three of us head after our goodbyes to Nigel and family up some great roads. A stop for coffee and we met up with Eddie, a 76 year old ex pat Lancastrian still riding his Triumph Thruxton to keep him young, these guys are an inspiration! Onto the excellent motorcycle Museum at Sorrento, great to see a good mix of bikes, also another farewell to Mark, last night camping in a very noisy campsite (5 feet from the road!) then today a much cooler ride to Williams Lake  (thankfully the bike has behaved till now)
So far really enjoying Canada, great people and great roads but why is our trip being governed by how far our bikes go without issues? Today we had to take a different route just to stay on a busier road in case of issues, adventure biking? .......really?....

We headed along the I 90 West which was fine for a while but an obvious airlock in my coolant system was ensuring the bike kept overheating, really not happy just now with my bike! We headed off the I 90 to get back onto the small roads and head into the mountains North of Washington as reccomended by Mark at the Norton Rally. An overnight stop at Winthorp, a cool cowboy style town, followed by a stunning ride along Highway 20! Totally recommended its a must do road! Just before we met the highway to head up into Canada we met up with Sean & Brian who had ridden across to the Norton meeting on an old Ariel Red Hunter and  Model 7 Norton, good effort lads, got to be a 3000 mile round trip.
The Canadian USA crossing was the fastest ever, 10 minutes, no grieff and we were into Canada, our 13th Country this trip and the 20,000 mile mark . Into Vancouver and met up with Dan (Sara's other half) We met with them last in Panama, they are now home for a 3 month work break! before rejoining their bikes in September for the trip South. Ramires & Pia who we also met in Panama were staying with them so we had an excellent meal together, cheers Dan!
Yesterday we headed into the city and met with Dan and sara for a whistlestop tour of the town and a beer (thanks again guys, much appreciated and we look forward to seeing you in Scotland next year!)
In the evening we met up with Martin Connachy and family who had just arrived to celebrate the birth of their first grandchild in Vancouver, congrats again Martin & Agnes. So our first couple of days in Canada have been spent amongs friends and today we head North West to Kelowna to meet up with Nigel Whittaker who we were with in Wyoming. After that we will be back on our own for the push North to Alaska! 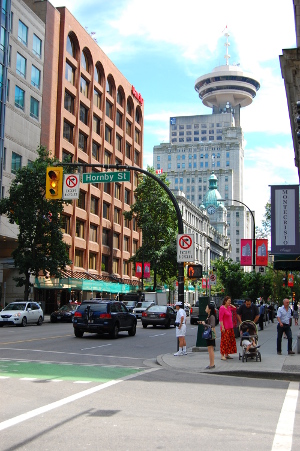 We had a great time at the International Norton Rally, so much so whilst saying goodbye to Captain Allen & the crew we decided to head to Cody Wyoming with them for another night, it was roughly on our route anyway and John Martin said there was a rodeo on so another box to tick.
Cody is a nice little town, still very much a cowboy town and still upholding the traditions including a gunfight every night outside the Irma Hotel (where may famous cowboys stayed)
The Rodeo was fantastic, we really enjoyed it, the skill of the cowboys & cowgirls was very impressive, after we ajourned to the silver dollar saloon for a very late night watching a band who mainly did AC DC covers (and well).
Goodbye said again Saturday morning and Fiona and I headed North into Wyoming intending to head as far as possible that day but as always Mr BMW has his part to play, after 100 miles my bike was constantly overheating, I'd noticed a weep from the water pump breather which is a sign the seals have gone, we pushed on another 50 miles but as it was around 100 degrees F the bike was only getting 10 miles before overheating. We spotted a sign for a campsite and while Fi set up the tent I checked the bike over, definitley the water pump so now in a quandry, I had a pump & seal kit but no gaskets, a call to the nearest dealer 250 miles away was not helpful so nothing for it but to get stuck in. Luckily 10 miles away there was a Autoparts shop which had the consumables I needed so while I stripped the bike Fi headed off to get Coolant oil and gasket cement just in case. Cutting a long story short I got it back together just in time to eat our dinner before dark.
Today 360 very hot miles to St Regis just off the I90, a couple of moments today with high temp warnings but it was incredibly hot and we were going quick so hopefully no more issues, Plan is to head to Seattle to stock up on BMW spares before heading to Canada and hopefully Vancouver Wednesday, of course it all depends on Mr BMW......again!

So a relaxed weekend in Pine Haven in the cabins then a night in Gillete before coming to the International Norton meeting in Buffalo, Wyoming. A different meeting from the European rallies but great fun also. So for the non bike lovers this post will be a tad boring, normal travels resume tomorrow as we start to head towards the West again and hopefully make Vancouver in Canada by early next week.