Clocks forward so it must be Summer

So today its official, British Summer time although as usual nobody told the weather! A bit of a wet start to the weekend but then Saturday turned out ok, better than ok actually, sidecar maestro Kenny Mclennan put us though our paces on his sidecar. First time in all my years I've ridden one, not so much ridden as it felt more like sailing, great fun though so much so provided I can get Insurance sorted out this week we've decided to buy Kenny's other outfit that was for sale. Plan is to do the Elephant Rally in January so snow tyres and chains will be a must, although I hate the cold this is a bit of a challenge so why not, never done that before so it has to be done. I could of course save money and stay warm by sitting in front of the fire watching shite on TV but where's the fun in that?
We both really enjoyed the experience and drove home to Embra with a big stupid grin on our faces, looking forward to more!
Today, the first day of summer saw us at the Norton meeting in Comrie, good turnout despite the cold and wet with a appearance by the Wormit boys with some tasty Commando's, some new faces as well so that was great. I turned up on the BMW as none of my Nortons are tested yet this year (hangs head in shame) but I hope to sort this soon.

The LLMCC rally this weekend up in Argyll was our venue for this weekend, a half day from work on Friday and a good run up, some rain and a stop at Tarbet for tea and a roll, perfect, the usual arrive meet old friend and pitch the tent. A crowded campsite made for some pretty powerful snoring and flatulence noises at night, the only downside. A great time had by all and some new ideas hatched perhaps.
It never ceases to impress me just how much like a big family meeting these events feel like, great people, great crack and plenty stories told and exchanged. Tighnabruach is a fine wee place for the weekend, recommended!
I'll let the pictures do the talking, weather was exceptional for this time of year. 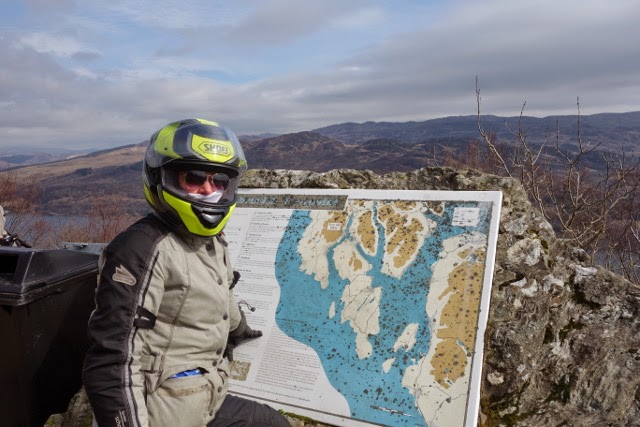 A weekend with nothing to do as far as "must do time-scales" so that meant some catching up with garage type work. First fix the pick up after I reversed it into a parking meter on Friday, luckily just the rear light cluster needed replaced, easy job and not the nightmare I'd imagined. Next onto the T3 Guzzi, rear brake siezed so a clean out and new pads made the brakes 100% again, the front forks were binding so a realignment of the front end sorted that, the side panels needed fixed, sorted! and the gear change was in need of attention, a new thread re cut helped the adjustment and after blowing up the tyres I had a bike ready for a run. A short shakedown run to Queensferry and I was very pleased with the outcome. There was a slight tail off in power at one point but I suspect paint debris in the tank after a careless paint job, nothing major!
Today a run down to East fortune airfield for Brunch with the troops, a hastily arranged meeting by Laurenne and Bert led to six of us turning up, temperatures just above freezing I guess, damned cold but on the Beemer so heated jacket and grips saved the day. Finally back to do some work on the Mk3 Commando, primary side checked and inspected and not to shabby, the alternator grommet needs replaced but as I got to that part, tiredness, cold and crabbitness set in so its abandoned to one night through the week, always better to walk away rather than bugger something up. A braw weekend! Thought I'd take some photos at the airfield in B&W to give it that WW2 feel!

Once again I have to apologise for the lack of updates, main reason is that we have been competing in Trials the last three weekends, competing is maybe stretching it a bit, turning up and being rubbish is a better description. A event near Laurencekirk and then last weekend near Gifford left me sore and very demoralised. The weather conspired against the organisers and for us newbies to the trials scene left us feeling way out of our depth. Last week I was ready to give it up, the lack of any progress, pain from my wrist and ankle led me to think, bugger this for a laugh, also been off alcohol for 3 weeks now , so my first thought was its an easier and more pleasant life drinking and having the occasional ride out on the road bike. My ankle was hurting from an old injury and new boots so I figured out this week a way of stopping the pain ( The Rondelli patented ankle protector is shown below)
After a fraught week at work (not stressed just dismayed really) I took Friday off to make some progress in the garage, progress was limited but at least there was some, the Guzzi T3 I bought in October I thought was ready to go but alas there are a few issues to be fixed before its usable, just what I need another bike in need of repair!
Saturday we had a long overdue ride on the BMW's, a pleasant day and great to be on the tarmac again. Today we were at the trial in Fife where I'm glad to say the organisers took into account that the newbies needed some leeway so they might learn something other than wallowing in the mud picking bikes up. A grand and successful day and my thanks to the organisers, we live to fight another day!
Looking forward to the spring and summer ahead and after today there will be some trials riding included in that.
The pics at the end are courtesy of our team photographer Eck Eadie, Lindsay hurt his back and pulled out so Eck was forced to photograph the D team!! Cheers Eck!