Scotlands "campsites" need to rename themselves

What defines the word camping, what image does it conjure up to you? For me it invariably involves a tent and a motorcycle, not a fecking motorhome, Caravan, "Camping pod" or any other form of accomodation, Camping means camping, in a tent, end off, I don't care if you disagree, that is what its been forever.
Caravanning and Motor-homing are totally separate but up until now we have shared our "Campsites" all in the great outdoors together. Only thing is those polluters of our highways who do have Motorhomes and Caravans are hardly sharing the great outdoors at all, first thing on site and adjust the satellite dish, break open the Tesco shopping and lock themselves in their aluminium box for the night, rarely contributing to the local economy except for maybe an overpriced Highland petrol station or a branch of a major Supermarket.
For years now in Scotland with a few exceptions (you know who you are) I've felt that we "tenters" are being treated as a nuisance and i always expected to eventually be turned away for having a tent and not a portable hoose on wheels but I always wondered how it would happen.
Roll on Covid 19 in 2020, Most Scottish campsites will have got their £10K grant (yes from the tent taxpayers as well) to "keep the business open" staff on furlough perhaps, and now when we can finally travel, the doors are firmly shut to us peasants who want to spend the night in a tent, not a thought for the DECADES we have spent cash in rural Scotland and the UK before the UK unleashed a pension pot hell of Motorhomes on society.
Most campsites in Scotland will not accept tents at the moment because...... the toilets are shut, lazy bastards, open them, pay somebody to clean them more regularly, dae somethin!!!!!
I know we have a virus going on, nobody wants to catch it and in my opinion camping in a tent with a occasional trip to a "cleaned" toilet must be pretty safe, safer than a pub, a bus, a train or god forbid a aeroplane. The government of Scotland have been complicit in this and will rue the day they once again didn't have any joined up thinking. Our countryside is being turned into a huge landfill site and toilet only because campsite owners cant be bothered with tents!
I am not telling you the very few places that are open to tents cause I want it all to myself!
BTW I have used pods in the past to escape very bad weather or Midges but I still prefer to camp 99% of the time.
Rant over.....

A hastily arranged meeting to take advantage of the weather at our layby near Aberfeldy. David T had pissing rain all the way over from the West until Killin, I had showers and then a bit of rain on first arrival which got rid of the biblical amounts of flies hanging around then the sun came out and it was glorious. For some reason only two of us took Nortons, the rest deciding to exercise their Italian or alternative British steeds, no matter, good company is what its about and as always there was great banter, I left early to go home and exercise another bike (they all need regular exercise you know) A braw day oot!

So another week on in this strangest of years, some normality creeping in but there is definitely a strangeness about it all I have never experienced, now in Scotland masks are compulsory on public transport (which I avoid) and shops (which is a bit harder). The population seem to be moving around like startled rabbits, a look of fear in everyones eyes. On the bright side now its possible to fill up your bike and pay for fuel without removing your helmet. I do find some amusement in it all especially the fact that before if you had entered a shop with a scarf or mask pulled up on our face then the alarm would have sounded, imagine a year ago entering the bank with a mask on, the armed response unit would have been there in seconds!
An update on the Bonneville, its back together after the fitment on taper roller bearings in the headstock, what a difference, far nicer bike to ride and control, I am pretty sure most Bonnies out there would benefit from a good check of the head bearings or maybe I'm just too fussy. Motorcycle rides are a bit different now in that you need to go prepared with a flask and sandwiches if you are out for the day, some cafe's are open now but its still too unpredictable to take a chance and there is something satisfying about being self sufficient although its not helping the economy!
Sunday saw a blast on the Moto Guzzi V11, great to go a bit faster on the main roads, recently we have just been wobbling around the back roads so its good to let the bike breathe and get into a gallop, also good to keep your higher speed awareness up there. We visited Fi's parents then a trip to see Bert and Laurenne, they are selling their Indian (the modern one) a barely used bike that'll be a good bike for someone.
Indian for Sale 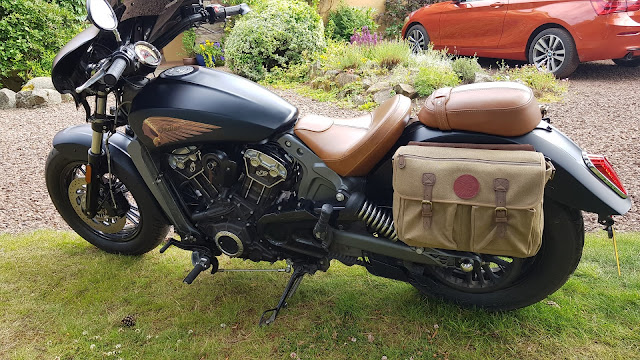 Apologies for the distinct lack of posts, the total insanity that has engulfed the world has obviously restricted our ability to travel too far and I don't suppose people want to see the same pictures and stories of the same roads and bikes week in and week out.
News from the workshop, I had some problems with Fiona's Norton which took a bit of figuring out, it seemed we couldn't get beyond Glenalmond without it starting to misfire and lose power, the only major thing I did to it over the previous months was a refurb of the carb and a new inlet rubber (the old one showing signs of cracks) I eventually solved it after a couple more carb checks, it was of course electrical, with the mini heatwave we had the last few weeks (service is back to normal in Scotland, its pissing down again) and the fact the Zener diode (a voltage control device) was at least 50 years old, a breakdown of the Zener meant the bikes voltage was being dropped to Earth by the diode and it had also killed the battery. A change over to the more modern regulator rectifier unit and a new battery thankfully solved the problem.
I dragged the 750  Drum brake roadster out again and its going well, the Mk3 has been getting used a lot also giving me much fun. The V11 Moto Guzzi was taken out of retirement and its great to be back riding that as well, such an underrated bike in my opinion and if you fancy one they are still relatively cheap. The T3 Guzzi has also been ridden regularly as well as the Bonneville, its getting tiring exercising them all regularly ha ha.
I was out on the Bonnie on Monday and to be honest its never felt great in low speed handling (walking pace stuff) So much so I figured there must be something wrong, the steering seemed tighter than it should be and when jacked up I could feel a slight "notch" in the central position so yesterday I stripped the front end off, disappointing to find cheapo ball bearings in the headstock, a set of tapered roller bearings are on their way and I'm sure then it'll be the bike i expected it to be.


Last weekend we had our first Tay Valley Norton meeting since the "crisis" a socially distanced meet in a layby near Aberfeldy, Nortons were going great and despite the rain and the lowering of temperatures the run and the meeting were great.
Good to catch up with everyone face to face so to speak rather than via telephonic communication. Four Nortons which wasn't bad and since Bill and Agnes has a fair hike in inclement weather from Aberdeenshire he was forgiven for bringing the Honda Bemoth (which I think Phil took a fancy to)
Good to see Wilson out for a run on the Guzzi, Brother John and Lesley, David doing his Andy Cap impersonation. Thanks to the back up crew of Geoff and Heather who brought the van and the kettle although everybody did seem to come prepared , I suspect a rise in sales for Thermos flasks!

And finally a short Video of the day, music by the Doors
Posted by Gino's Travels 2 at 10:19 2 comments: