So last week a short visit to Italy to catch up with friends and relations and to escape the colder weather for a few days. Some motorcycle activity as I helped my cousin set up his 3 1/2 Morini, really tidy 40 year old model and nice to ride, I've always admired them and after working on and riding one i'd be tempted at the right price, looks like UK prices are about twice Italian prices in their domestic market. Great time had, weather was mixed but in general very warm during the day, nice wine, nice views and nice people, whats not to like, now back in the land of single digit temperatures and will just need to toughen up, managed to break a rib while I was away, painful and very debilitating, still it was my own fault so just need to get on with life whilst moaning ouch ouch ouch all the time.

The DGR as its known has become a bit of a sensation, masses amounts of money gets raised each year for Mens Prostrate Cancer research and Mental Health, originating in Australia a few years ago its now a worldwide phenomenon, having never considered myself a Gentleman and by no means Distinguished I'd never given it a thought. Our friend Geoff Mumford was this years organiser and had been hassling us to take part, Fiona said she'd take part and then entered me as well using the excuse Geoff wanted a Norton along so that was it! It turned out to be a great day, met lots of old friends and met some new interesting people, maybe it should be re named the Interesting Peoples ride? Nice bikes, nice people, helping worthwhile charities and a gentle meander in the country, whats not to like, photos as always tell the tale, oh and our little group raised over £3000, thanks to all our sponsors.

And finally, I take loads of photos but for the first time in a while somebody got their own back and posted this photo on social media, the Black and White over exaggerates my wrinkles and imho makes me look much older than 21, good picture though 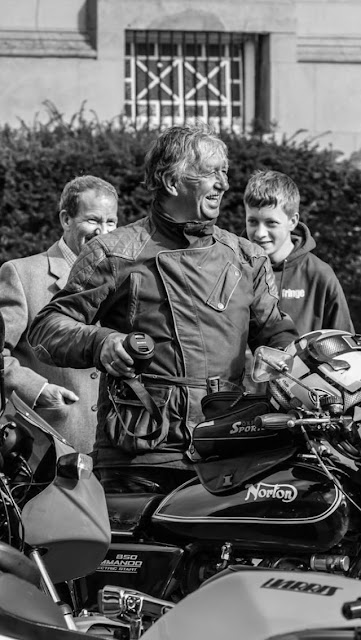