Circumstances meant our usual trip to Southern Ireland to see Martin and the crew didn't happen, a most excellent substitute though was Norrie's Sidecar rally at Moniaive, Dumfrieshire. Its a part of the country neglected by tourists in general and its their loss, most tourists are speeding up the M74 or A1 to the Highlands not realising the jewel that is the South of Scotland. The great thing is the roads are very quiet which for us is perfect, not the campervan and caravan hell that the A9 has become. We rode down Saturday in excellent weather, the field was already full of the usual (and some unusual) suspects. One good thing about sidecars and their owners is that in general they are a bit different (in an interesting way) Bert, Laurenne and Ian appeared and the evening sped by in a flurry of beer and large whisky's. Sunday appeared alongside a hangover but it was a scorching day so we sat about outside all day trying to cultivate some sunburn, we were joined by Liz who came across from Prestwick for the banter and Dave who rode down from Luss for the festivities. White wine in the afternoon sun is most agreeable but after 3 bottles, some more beer and whisky it meant that today (Monday) my co pilot took over the controls for the homeward journey whilst I sat in the chair contemplating whether I will ever learn my lesson. A fantastic weekend helped by the weather, next year we'll be back in Ireland to try to catch the rain......... 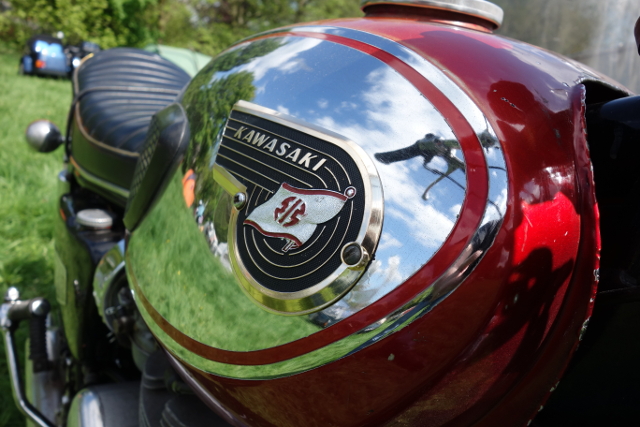 Today the forecast was for some heat and sun but only after the rain cleared so we took advantage of the 3 hour summer weather today, a fine run up past Knockhill for a late lunch at Powmill. The weather brought out plenty motorcyclists, all shapes and sizes which was good to see. I met an old friend there out with his wife enjoying an ice cream in the sun. She instantly reminded me of an incident returning from the TT in the late 70's where I cleared the queue on the Steam Packet boat for teas and rolls by throwing up in the bin , this was of course after a last night party on the IOM (before I raced there) Now I have raced bikes, ridden halfway (or more) around the world and yet the only thing I'm remembered for is throwing up in a bin almost 40 years ago, sad eh?
We continued through Perthshire and parts of Fife before stopping at Port Edgar in the hope of a cup of tea, the café though was closed (why close on a sunny Sunday evening? It doesn't happen often , I'd have maximised the opportunity) Tealess we wandered around looking at the launch of a yacht and looked at the boats until the cold from the water reminded us its not proper Summer yet.
So the Guzzi is running much better but the critical part of me says there is still some fine tuning to do before its perfect.

This year’s Scottish Moto Guzzi was welcome, for me it marks the end of the winter normally, the last few years the seasons seem to have slipped, now we seem to have a long period of shit weather followed by some less shit weather and then a glimmer of heat before it turns shit again. It had been a rough week in the run up to the rally with several bits of bad news so I was looking forward to a blow out, we started accidentally a day early but that’s another story involving trains to the wrong destination and unscheduled visits to a hotel!
The run up was cold, a bit wet but clearing towards Stirling, when we arrived we heard there had been a few call offs due to snow in many places, England seem to have got it worse so numbers were down, it was up to the remaining troops to help get through the beer! The evening started with one of the Scottish Branch members having what we thought was a heart attack, collapsing, having to be resuscitated via CPR (thank god someone knew what they were doing) and the local defibrillator being called into action. Very dramatic but I’m glad to say he’s doing ok and on the mend now. The Friday after we got over the drama was a bit subdued but a chance to have a chat and catch up, we also made a new friend, Guy from the Belgian Guzzi club.
Saturday I had to go up to Perth to pick up some newly machined engine parts from Derek Wilkie (Engine Resource) and visit my sister, an opportunity to get clean in comfort as well, a fine run up and back with only a hint of showers. Saturday night was excellent, copious alcohol, good music and dancing, the rain though got into the tent during the night and we woke up to wet gear which wasn’t good. Breakfast over we found out a camping hut had become available so we decanted into that. Sunday was spent talking nonsense, sobering up and coming 2nd last in the quiz (not enough bike questions!!!!) Another band on Sunday night and that was that, Guzzi rally over till next year, thanks to the organisers who put on an outstanding rally again, oh and it still doesn’t feel like summer!!!!!