So after a week with the nose at the grindstone or in the trough whatever you prefer it was time to catch up on some maintenance. Saturday was spent fitting screens to the Guzzi and to the yellow Norton and changing the postage stamp size screen on the BM outfit to something more barn door like. The screen fitting frenzy took all of Saturday and at times I wished I had 5 arms and hands but its done, main reason for this is the weather, It's been so shit that I'm attempting to get some protection from it, the global warming bullshit has turned Scotland into a even colder and wetter place than normal, and there was me thinking we would have warmer summers as well, I blame it on all these wind turbines, if they build any more in Scotland then there's a good chance the country will take off!! I for one am happy they're stopping subsidy's, a desecration of our landscape and ruination of many fine roads during the construction, I reckon they're turbo-charging the wind and altering the jetstream themselves (I am writing this with tongue firmly in cheek)
Anyhow, a wee run on the Guzzi today showed the screen is first class, a nice cuppa down by the new Forth bridge and then an afternoon twirling spanners again, changing the clutch centre on my Norton in an effort to make it even more unapproachable(Norton Joke) for the run to Belgium next month. Why is it despite having a large stock of consumables the one grommet I need before I start building it up again is not there, oh well a wee job for through the week maybe.

Wednesday night after a day lazing around Poolewe we went to the local ceilidh, earlier I had been given a disapproving look in the shop as I bought a half bottle of whisky to fit in my pocket for the ceilidh , guess who was taking the entrance money at the village hall, yes, the same woman. That didn’t spoil my fun or whisky consumption anyway, a great night and a great band, the lead singer / musician Sandra MacBeth who’s from the area but coincidentally we found out lives above Fiona’s Cousin in Portobello in Edinburgh, is a name to watch, very talented.
A pleasant run to Lochcarron for a stock up and a late breakfast at Kate’s Riverside café followed by a visit to Lochcarron weavers, the weather surprisingly warm and pleasant. The run over the Bealach was a challenge for Fiona who was piloting the sidecar, difficult enough without the handful of ignorant arseholes on bicycles and in vehicles not actually suitable for the hill, everybody else has to murder their clutches so that the inconsiderate people can hold everybody else up, that said most users are courteous, a great effort by Fi who kept it together on the way over. Applecross was bathed in sunshine on the Thursday so we sat outside and waited for Alex to arrive, and then we waited some more, just at the point worry was creeping in he arrived with the worst excuse yet for lateness he couldn’t find his boots ! Alex pitched camp then we had a jolly night in the pub, great crack as always and met a couple from Dunkeld who recognised us from a wedding last year, small world again.
The weekend was spent in typical Applecross fashion joined by David and Anne, Liz and Ewan (who arrived at midnight on the Friday, top marks) Bert and Laurenne (in the new Land Rover) Ian, my brother John and  Lesley made up the troupe for the fun weekend. A reasonable run down the road with only torrential rain for the last 20 miles spoiling the fun.
Another great trip, less miles than normal, more wind and rain than normal but it had many special moments, Scotland really is a great place to ride a motorcycle and I suppose if it were warmer the roads would be more congested and the wind and rain kept the midges away. Now I’m lagging behind in the Bealach stakes, I haven’t ridden a sidecar over and Fi’s done it twice!!

We left our campsite and headed a bit further South to the Loch Erisort Hotel, a warm inviting sight after our stormy camp, as we booked in I looked around and saw a similarly confused Ian Coull and family, Ian is our treasurer for the Tay Valley NOC and I used to live in the same village, however seeing that his wife Anne's mother is from this area it probably wasn't that much of a coincidence.
The hotel was nice with friendly staff and recommended if you are in the area. Monday we headed to Stornoway to the ferry back to Ullapool and then a bit further North to visit Kenny and Sheila at the Culag Hotel in Lochinver, old friends who used to go to bike rallies at one point in a bike and double adult sidecar, fridge strapped between the two, two kids and a huge dog in the chair and Sheila on the back. Kenny gave Fiona some tips on how to pilot the sidecar but remembering a particularly spirited ride across Bute followinh him in the chair I wasn't sure if that was a great idea.
If you're in the North of Scotland, a great place to stay the night,great roads and a huge whisky selection (just don't mix the two)
A trip further South to Poolewe with some nice weather for a change and now a rest day before the Applecross madness. Some flower pictures to show my tree hugging side and to brighten up the otherwise dull pictures!

After the stop at Kilbride we rode through Benbecula (strangely very populated) and then to North Uist to stay in Lochmaddy for a couple of nights avoiding the heavy rain and the possible strike by cali Mcbrayne, as it was the strike was called off after intervention by the first minister, still not convinced the Scottish Government are playing fair on this one but that's a rant for another day! Nice friendly hotel in Lochmaddy and not much else to do but drink and eat, luckily that's not a problem for me. We got the ferry from Bernery to Leverburgh on North Harris, amazing to see the ferry manoeuvre a zig zag course across the sound, tricky stuff and wouldn't like to try it in bad seas. We stopped for the night at Uig Sands having just made the nearby distillery before it closed.
The rain and wind were incessant but the view and the sands was impressive when you could see it. Its a while since I've spent the night in  a tent drinking whisky because it was too wild to go outside. One of my boots had been leaning against the side of the tent and in the morning I had to empty the water out of it before putting it on, another great experience, more to come, its not over yet, stay tuned!!

Well the last few days have been chilled and challenging at the same time, we caught the boat from Oban to Barra,a five hour crossing. The plan was to camp but as we arrived it was windy and raining horizontally so luckily I managed a bit of negotiation on the price of a Hotel room. Heading the next day from Barra to Eriskay we followed the small single track road through pleasant scenery, as we went to board the ferry, the BMW did what its good at, it broke down, we push started it with the help of a fellow motorcyclist and boarded the ferry and spent the crossing unsuccessfully trying to diagnose the issue. The cali MacBrayne guys helped me push it up the steep slipway and i bump started it heading down the slipway to the boat, very dodgy indeed. I did have a bit of a panic as they started to lift the loading ramp with my Norton still on board, it gave the guys a laugh as i sprinted back towards the boat, they were only moving it back to compensate for the ebbing tide, luckily i didn't suffer a heart attack in the panic. We stopped at the Politician bar to take a photo (named after the SS politician which sank nearby in 1941 and which led to the making of the film Whisky Galore)
After crossing to south Uist we found an excellent campsite at Kilbride, possibly one of the cleanest and best equipped campsites i've been to. Nice cafe with wifi on site also which was a bonus. After making camp I called base camp (Alex) to ask him to look on the internet for possible causes to my issue, much poking and hoping later we found the issue, a wire had come off the starter solenoid and had fooled the bikes electrics into thinking it was in start mode shutting down mos of the bikes electrics. At the end of the day an easy fix and much relief! A couple of days doing not much followed, photos tell the story 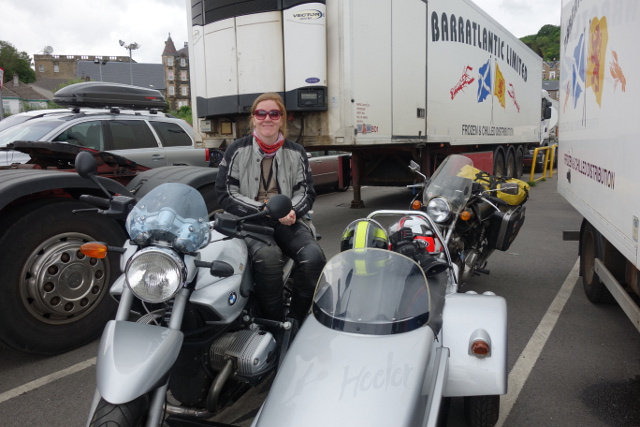