I haven't been to the Classic club for years for some reason but as we needed an excuse to put some miles on the new Guzzi's we went along to Leuchars to see what what was happening. A great array of bikes were there and we must of been late as some were leaving as we arrived (maybe just us!)  I met some people I haven't seen for years and it had a great vibe. Great to catch up with everyone and good to see fellow Edinburgh refugee Mike McGrath who has recently moved to Forfar, small world, Mike and I worked together years ago and we used to see him at the Lothians and Borders classic club until we moved to Perth, nice night and another 75 miles on the clock to add to the tally.

Well not bad after a lifetime of motorcycling I finally bought a brand new bike, not one that some else has owned but mine. Now when I raced bikes in a former life I had a few new bikes but they were tools of the trade, matter of fact most of the time when I was racing my road bike was a Norton Commando, hardly up there with technology but it gave me pleasure away from the racetrack and took me to my place of employment, I still have it and it continues to excite me but the new bike.....

Many of you will know our Russia trip was abandoned just before we left due to Covid, then of course there is a conflict going on and I'm not we will be welcome at the moment and there was a hiccup almost three months ago with my health so what to do, easy, bugger it and buy a new Guzzi V85,

We talked about it for a while as a bike we might buy after the Russia trip and so we just decided to go ahead and do it. Our Triumphs were traded in to Jim Allen's in Falkirk, the only Guzzi Dealer in Scotland, and we were please enough with the deal (obviously we would have been more pleased with a higher trade in but that's business)  The shop had a V85TT Travel in stock and a v85 TT Evocative which Fiona likes as it was colourful. Mine came with a load of extras (Some of which were useful) and Fiona's has to get a couple of Extras, and last Friday we picked them up. 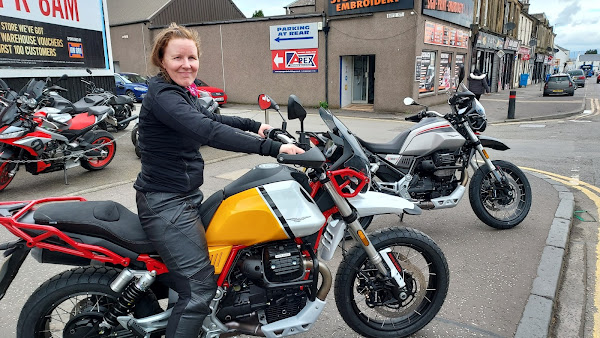 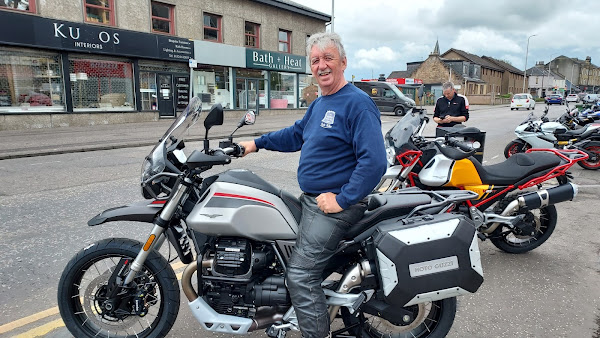 Mines is less colourful, a bit like myself or and before you  say it GREY. After the paperwork was done we set off, very weird, me an a new bike, first impressions were that maybe it seems top heayy but a quick fill up at the petrol station it seemed fine, Heading to Perth it was all I could do to keep it below the 70MPH running limit (and it also of course the speed limit) We got home and had a cuppa tea, We both liked them and Even Geoff who appeared seemed to like them, I adjusted my screen (the higher one comes as standard on mine) and took my panners off. We then done a hundred mile lap of Perthshire  including stopping for our dinner  and got home just before 9, our first stop saw the tank take just over 9l of Petrol a MPG figure of around 63. We were both very pleased with them.
Sunday we had a lap down the coast to almost Morpeth and cut across to the A697 towards Coldstream and back home via Edinburgh, My bike said it had no petrol left whereas Fiona said she had 84 miles to go, into Perth and filled up mine took just over 17L and Fionas 16L , the tanks hold 23L so Fionas is the more accurate as the fuel gauge goes but to know I can get 250 miles without a stop cheered me up. They are comfortable, they handle well and are both returning over 60 mpg (Fiona nearer 70 because she is lighter in weight and on the thottle). Even after 250 miles we both felt great , I think the seats will wear in a bit, and I need to sort out some buffering from the screen but at the moment they live up to expectations and more.
Posted by Gino's Travels 2 at 15:14 8 comments:

Well because of the dreaded C19 thing this was the first rally since 2019, in 2020 we should have been there to leave for our Russia trip, how the world has changed! The Rally was in the Falkirk Rugby and a good place for a Motorcycle rally, the only Guzzi dealer in Scotland is in Falkirk and the staff at Jim Allens motorcycles done us proud by having an open day on the Saturday complete with free grub for the Guzzi crowd, a generous gesture indeed.

The rally was great as usual and it was good to meet many of our friends we hadn't seen for a couple of year, the Guzzi crowd are a friendly crowd indeed. Fi and I went for a run to our old haunt at South Queensferry on Sunday which was nice (where we got married) and over the 3 nights a great time was had by all. We stayed in a Hotel nearby for the first time ever due to medical reasons but hopefully soon I'll be back to camping.

The pictures tell the story...