Last run of the year?

I hope you all had a great Christmas, I did although as usual more alcohol consumed than is good for me! After the last few weeks of stormy weather we took advantage of a break in the weather today to get out on the Norton. We would have used our BMW's on such a mucky day but due to general incompetence by the shippers they are still enjoying the heat in a Miami warehouse! Hopefully leaving the USA on the 4th of January so with a bit of luck we'll get them back before February.
Fiona mapped out a great route using some very small back roads around West Lothian and the Borders, due to the Norton being over 40 years old its electrics can't cope with our heated gear so bloody cold was the order of the day! Because of the Stormy weather over the last few weeks many of the roads were flooded and had water running across them so it really was a mini adventure albeit a cold one! Next week weather permitting we have the Lothians and Borders Classic club "Frostbite" run so today was a good practise! I hope 2014 brings you all happiness and good health!  Lang may yer lum reek!

As I keep saying still struggling to cope with life back here but something else is eating away at me, since I've returned I'm astounded at the state of our country, how low its sunk.
First thing was Edinburgh Council who we contacted the first week back to let them know we were back in residence so we can pay the Council tax at the correct rate (we got a 10% discount for not being here, joke or what) they are impossible to contact so all correspondence has to be done by E mail, they state they will answer within 3 weeks. Three weeks to answer an E mail, surely that has to be a joke? As it happens despite 3 E mails they haven't answered any in 5 weeks so take a bow Edinburgh Council for a great example of how inefficient and useless you have managed to become.
While I'm on the subject, refuse collection is now only every 2 weeks but you can recycle your old food, paper, glass, garden waste by putting them in the appropriate bucket and leaving it out whenever. So before we had 1 collection a week, a truck & 5 guys would take our stuff away, now we have about 5 trucks and god knows how many guys stalking round the doors to collect your carefully sorted shite! Green, I don't think so, another example of ideas in action, another big fail.
I used to work for O2 the mobile phone company, used to pride ourselves on Network Quality, its now a joke, unable to make or receive calls most of the time and when you do get through the voice quality is shocking, complaining is a waste of time as they have outsourced the call centres and obviously dumbed down the customer service people!
And finally I just found out 10 minutes ago that our bikes are still in Miami, seems somebody "forgot" about them. How useless is that? 7 weeks on and they are still exactly where we left them, the best we can hope for is our bikes and gear will be back at the end of January so that being the case they will have taken over three Months, and I've just found out it takes only 5 days to get to the Moon!!
I suppose what I'm saying on this dark Friday December afternoon is that no matter where you look you see indifference and uselessness on a grand scale, kind of depressing isn't it? Now where did I put the whisky..........

Only 10 days to the winter solstice here in Scotland, the shortest day of the year. After that the days will become longer (thank God) and we will be heading towards Spring. Work on the book continues very slowly as does work on the presentation! Some garage work being done as the temperature isn't too bad, the AJS is on the bench in an attempt to get it charging. No sign yet of our bikes coming back to the UK which is a bit of a worry but hopefully we'll hear soon.
Sunset starts early around these parts at this time of year, a nice day today but darkness coming in already at just after 3pm....... 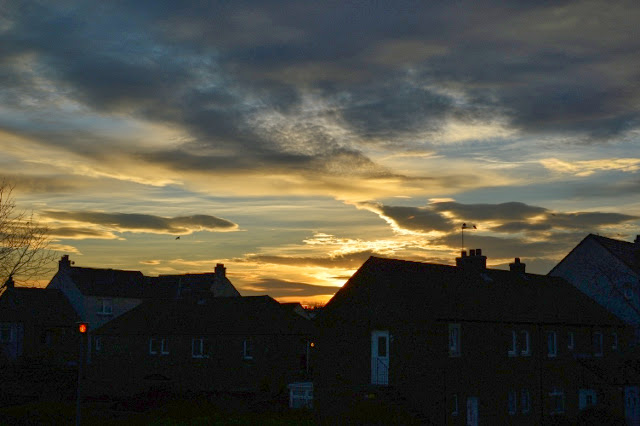 Trying to re adjust to "normal" life is still a little difficult, I suppose the problem is when you come back from a big trip and return to your old life it is just that, your old life. Not a complaint though, it has been great meeting up with family and friends and i'm sure they're bored already with our stories. I've started working on the book of the trip but thats going slower than I anticipated because "stuff" gets in the way, also working on a presentation which I'm hoping to be ready early January, so if you fancy the two of us boring your bike club or bike shop (or anything really) we will be available from January on, my contact details are on the profile blurb.
Today assisted as always by Alex I relocated a couple of my Nortons for a while to make room for my AJS which probably deserves a better home. Also hoping to hear something about or BMW's shortly which are hopefully getting near the UK by now (or maybe they are still in a warm warehouse in Miami, wouldn't blame them!)